I recently watched the Michael Moore film, “Planet of the Humans.”  Not coincidentally, Moore released the film on the 50th Earth Day and fifty years after his first film, an Eagle Scout project, which dealt with pollution in his hometown in Michigan.  I was struck by the sheer waste of resources needed to construct, develop, and maintain the large scale solar and wind farms and the vast amount of real estate to host them.  The footage of abandoned sites littered with broken, decimated, and useless collectors of sun and wind, underscores Moore’s motive to expose the failure of the renewable energy movement (at least the large scale production facilities), its value as a contributor to our energy needs, and its burden on national and local power grids.  It also violates Moore’s and my Boy Scout principle of “Leave No Trace.”

Recently, NY State and the Commonwealth of Virginia approved huge funding of their version of “New Green Deals.”  Both will commit billions of dollars towards large scale solar and wind facilities, much at taxpayer expense and funded by ratepayers of the utilities serving the individual localities within each.

The net result, through Renewable Energy Mandates (REM)/Renewable Portfolio Standards (RPS), is there will be higher utility/electric rates, a compromised weakened energy grid, and little to no contribution towards GreenHouse Gas reduction (GHG) nor reduction of Anthropogenic Global Warming (AGW).

Over the past few years, I’ve witnessed installations of solar panels on neighbors’ roofs and elsewhere in my surrounding communities.  A few of the installs are suspect in that they are not efficiently positioned; meaning they face east, west, and sometimes, north.  Some are in well shaded paths, some behind or partially blocked by dormers and other extensions.  The homeowners I spoke with had engaged/installed these arrays “to do their part” for climate change/environment etc.  They now have a 15 year or longer leasehold or lien on their homes for this “privilege.”  I know a few solar contractors with decades of experience.  They have survived the ebbs and flows of the Renewable Energy Tax Credits/Incentives that have been meted out over the past 40+/- years.  They have witnessed the utilities on/off programs of Feed In Tariffs (FIT’s), RPS, and other similar programs to encourage or induce installations for “green energy.”  Their installations are based upon the true merits of a Return On Investment (ROI).

Sans these “Inducements,” would these consumers have installed systems based solely on the merits of ROI?  Probably not.

The reality is that many of these installations are part of a “documentation” process in which the utility needs to demonstrate the “installed production output” power to the state as part of its contribution to these RPS/REM’s.

The utility is required to:

Bottom Line:  The higher % RPS, the higher the cost of electricity

What are renewable portfolio standards?

Renewable portfolio standards (RPS), also referred to as renewable electricity standards (RES), are policies designed to increase the use of renewable energy sources for electricity generation. These policies require or encourage electricity suppliers to provide their customers with a stated minimum share of electricity from eligible renewable resources. Although national RPS or other clean energy policies have been proposed, no federal RPS or similar policy is currently in place. However, most states have enacted their own RPS programs.

How have RPS programs been implemented?

State RPS programs vary widely in terms of program structure, enforcement mechanisms, size, and application. No two state programs are exactly the same. Some states focus the RPS requirements on large investor-owned utilities, while others apply the standards to all utilities operating in the state.

A wide range of policies fall under the RPS umbrella. In general, RPS set a minimum requirement for the share of electricity supply that comes from designated renewable energy resources by a certain date or year. Generally, these resources include wind, solar, geothermal, biomass, and some types of hydroelectricity, but they may also include other resources such as landfill gas, municipal solid waste, and ocean energy. Some programs also give credits for various types of renewable space heating and water heating, fuel cells, energy efficiency measures, and advanced fossil-fueled technologies.

In addition to renewable energy standards, some states have clean energy targets or goals.

What are the different types of renewable energy?

Biomass energy – Biomass energy is produced from non-fossilized plant materials. Wood and wood waste are the largest sources of biomass energy in the United States, followed by biofuels and municipal solid waste.

GeoThermal – Geothermal energy is heat from the hot interior of the earth or near the earth’s surface.

Fissures in the earth’s crust allow water, heated by geothermal energy, to rise naturally to the surface at hot springs and geysers. Wells drilled into the earth allow a controlled release of steam or water to the surface to power steam turbines to generate electricity. The stable temperature of the earth near its surface is used in geothermal heat pumps for heating and cooling buildings. 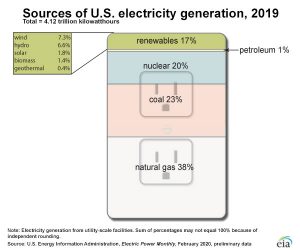 The evidence from other states throughout the country is clear.  Renewable energy mandates drive up electricity costs.

Why Does an RPS Drive up Prices?

One major reason for the higher costs in RPS states is that the mandate often precludes utilities from buying the lowest-cost energy source.  For example, even in circumstances where natural gas or coal prices are very low, if a utility has not met its RPS requirement, it will have to purchase more expensive wind or solar power to comply with the mandate.

The other lesson from the failed experiment with RPS is that politicians, regulators, and activists cannot know what the most affordable energy supply will be two, five, or, certainly not, 10 years down the line.  A recent case in point has been the dramatic and entirely unexpected reduction in natural gas prices from more than $10 per million cubic feet to about $3 today.  This 70 percent reduction in domestic natural gas prices has made the fuel much more affordable than virtually any other source of electric power, and more cost-efficient than wind and solar power in many states. 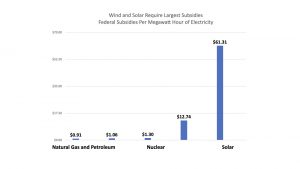 Today, wind and solar power require federal taxpayer subsidies that range from 5 times to 60 times higher than any subsidy provided for natural gas or coal.  (Reminder: Federal tax law provides a 30 percent tax credit for all energy produced from wind and solar, a cost borne by taxpayers.  Almost no other industry in America receives that advantage.)

The era of $3 natural gas significantly altered the energy industry.  States without RPSs were able to react instantly to the windfall benefit of lower rates passed on to their customers.  One lesson here is that locking a state into one form of energy production over another can have unintended harmful consequences, given the dynamic nature of the energy sector. 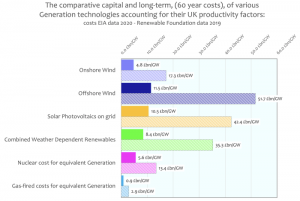 Yet, many states are increasing the required contributions by renewables to their RPS/REM’s.  This increases the costs borne by ratepayers in their electricity bills, and to the taxpayer in funding and subsidizing these expensive, intermittent, and not-so-clean energy products.  A review of a few states’ requirements spells it out.

In April, the Virginia Clean Economy Act, established a renewable energy mandate forcing state utilities to produce 14 percent of their electricity generated from “renewable” sources in 2021, gradually increasing the mandate to 100 percent by 2050.

This could cost Dominion Energy Virginia ratepayers $3.3 to $5.9 billion over the first decade, increasing average electricity bills from $84 to $144 per year.

This renewable energy mandate is going to make everything more expensive for working families in Virginia while substantially raising costs for businesses.  The average Virginia resident at or below the poverty line already spends around a quarter of their take-home pay on energy costs.

Committed to a $33 billion five-year climate change investment with $28 billion allocated to Green Energy.  The goal is to have 70% of electricity from Renewable Resources by 2030.  New York has one of the highest electricity rates in the country at present.

While approximately 19% of California’s energy is generated by renewables, it comes at a cost.  Electricity costs are 45-85% higher than the U.S. average, dependent upon location and residential, commercial, or industrial rating.

Comparatively, states with low to no mandates can act quickly to capitalize on fluctuating rates and acquire sources to produce lower energy costs, both short and long term.  With an abundance of natural gas in the U.S., costs have hit all-time lows.

In summary, these policies are potential failures on all fronts.  They do not eliminate our needs for fossil fuels – which are needed to manufacture their components; to transport them; to erect them; and to supplement or replace them when weather conditions are unfavorable (a majority of the time).  And, they are inefficient – only producing 13-32% of their stated output.

RPS will increase costs significantly to the consumer and seriously impact the lowest socioeconomic groups adversely.  They burden the taxpayer at all levels of government – federal, state and local.  They leave a waste stream that is non-sustainable.

Lastly, they produce unreliable, interruptible, and costly energy.    Our economy requires reliable, available, and inexpensive energy.  Anything less is a recipe for failure and economic disaster.