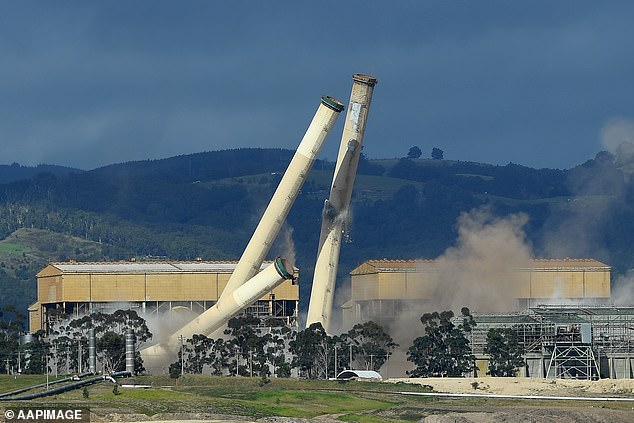 “One of the great mistakes is to judge policies and programs by their intentions rather than their results”. — Milton Friedman

America and Australia are energy abundant nations.  Each are blessed with an abundance of coal, gas, wind and sun.  Each possesses the raw materials for nuclear power and stable site locations.  Yet, this current century has brought about policy mismanagement; and force-fed renewable energy mandates, ad-hoc subsidies and anti-science fossil fuel moratoriums.  Australia now experiences third world energy dilemmas during the summer.  Energy is being rationed and Australians encounter rolling four-hour blackouts.  America’s march toward increased dependency on weather-dependent renewable energy will bring it to a similar future.

Australia’s loss of cheap energy is undermining its industrial competitive advantage.  The Australian grid is being challenged to distribute power efficiently and effectively between industrial users and households.  One of Australia’s largest steel companies is expanding a mill in Ohio where energy costs are 1/3 of those in Australia.  (Coal-fired generators still provide 75% of Australia’s electricity.)

These politically contrived schemes of “100% renewable energy” are self-defeating.  This is because of the inherent unreliability of renewables.  This results in significant Greenhouse Gas (“GHG”) emissions occurring from the unavoidable need for backup dispatchable and reliable fossil generation.  Backup fossil generation is required to provide grid stability functions including frequency, voltage and synchronization control, daily system load ramping and to prevent power shortages and blackouts.

Accordingly, unless the U.S. is willing to abandon electric grid system stability, reliability, and knowingly accept that significant periods of grid instability, power shortages, and blackouts will occur throughout the U.S., there is no choice but to acknowledge that GHG emissions cannot be avoided with a 100% renewable generation political mandate.

Because of the need for conventional backup generation to avoid blackouts in a “100 percent renewable system” and because those backup units would have to be cycled up and down depending on wind and sunlight conditions, one ironic effect would be GHG emissions 22 percent higher from natural gas–fired backup generation than those resulting from all natural gas–fired power generation in 2017. And, those backup emissions would be over 35 percent of the emissions from all power generation in 2017.

Without fossil-fired backup generation, the national and regional electricity systems would be characterized by a significant decline in service reliability — that is, a large increase in the frequency and duration of blackouts. Battery backup technology cannot solve this problem. It is unlikely that a power system characterized by regular, widespread service interruptions would be acceptable to a large majority of Americans.

WEATHER DEPENDENT –   A look at the graph below will clearly indicate the erratic and unreliable effectiveness of wind energy.  On nine days production fell below 10% of which three days fell below 5% of installed capacity. 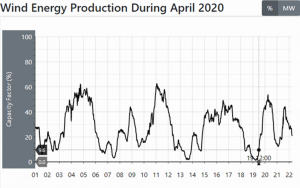 This requires always on back-up power supplied by predominantly coal fired generators.  On days when wind is blowing too strongly and with solar on extremely hot sunny days, too much power is supplied causing voltage fluctuations contributing to grid instability and service delivery failures.  As Australia decommissions, and in some cases eliminates (detonates) the coal fired power plants, it will continue to experience service interruptions in the form of rolling brownouts or blackouts.

NEED FOR BACKUP POWER – As indicated by the next graph, Australia still produces most of its electricity utilizing fossil fuels, mostly coal.  It is abundant, less expensive and has been the main supply of power generation for a century.  And, while renewables contribution to supply continues to increase, it is at a cost.  Subsidies and higher energy prices are at the tax-payers’ and rate-payers’ expense. 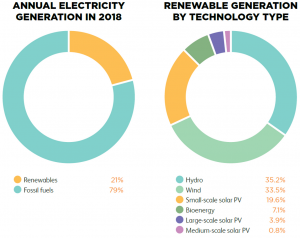 COST OF ELECTRICITY – Rates vary by state and tariffs, with the higher rates being tied to those with a higher proportion of renewables in their production mix.  Rates of 40% above average or more are common.  In all cases, the addition of renewables to the energy mix has increased rates for electricity.

THE MIX: This graph shows “The Perfect Renewable Energy Day” – (sunny day) local solar (white area) wind blowing for a 30-40% capacity all day with peak production at noon.  At best, these renewables will generate 37% power at peak-time (solar: daylight only); while on “Drought Days” [no sun, no wind] their energy production must be replaced. 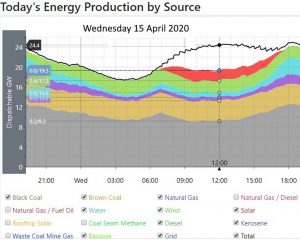 The push for a clean energy system powered by weather-dependent renewables is counterproductive and risk averse.  Grid infrastructure, stability and maintenance are compromised by the very elements they seek to harness.  The costs related to constructing, installing and siting these renewables are more costly, too.  Even with subsidies, tax incentives and inflated rates (all borne by ratepayers and taxpayers) they are more expensive to the end users and do very little to impact the GHG level that is the impetus driving the path towards the “clean energy” solution.

The following headlines/article titles are all recently published in Australian media:

Note how each province/state has its own unique yet similar issues with power delivery (or lack thereof).  These could soon be written here in the United States if we continue on this road unchecked and unchallenged at the local and state levels.

In a future blog, we will tackle the economics and history of the renewables market up to present day projects and proposals.